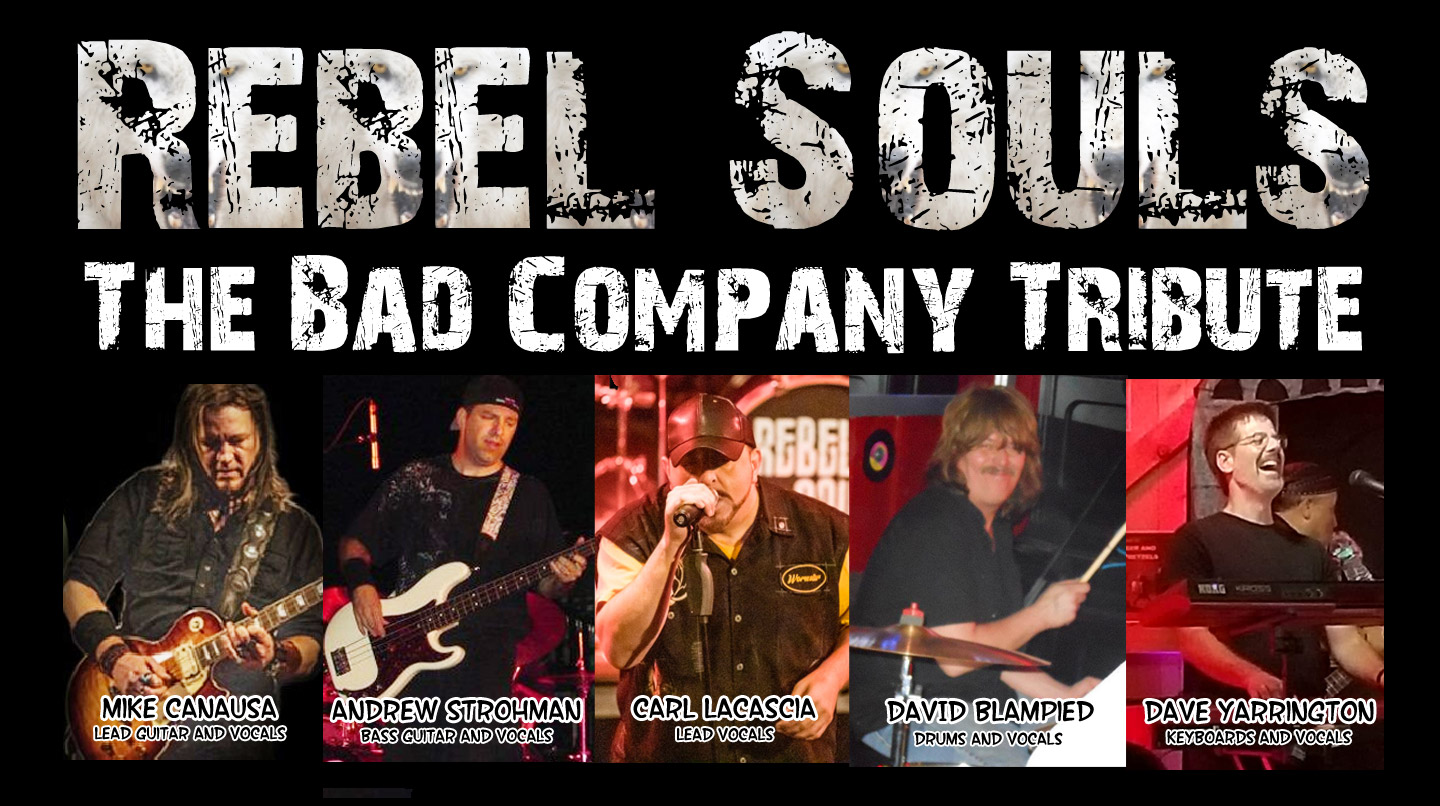 Rebel Souls performs all the best songs from the British hard rock supergroup Bad Company, creating a powerful, authentic Tribute to the greatest blues-rock singer of all time, Paul Rodgers. Covering all the huge classic rock anthems from Bad Company mixed with some of the popular hit songs from his first band, Free.

Rebel Souls also pays tribute to all of Paul’s hits with The Firm for good measure.  All wrapped up in an entertaining showcase of danceable sing-along songs that will have everyone in attendance “Dancing in the Aisles and Singing Out Loud!”

Carl LaCascia – Lead Vocals
Carl has been a classically trained professional vocalist for over 30 years, performing in theatrical music showcases, as well as with many popular party bands, and improv/variety productions throughout the Tri-State area of NY. Carl’s strong lyric baritone voice and solid stage presence are a perfect fit for a tribute to Paul Rodgers, from his years in Free to Bad Company all the way thru to his days fronting The Firm, The Law and Queen. Carl is honored to be part of this authentic tribute to his favorite vocalist.

Michael Canausa – Lead /Rhythm Guitar and Backing Vocals
Michael began playing guitar and bass in his teens. Later, his love for the 6-strings was rekindled when he joined the classic rock band, ASYLUM ROAD. He then formed FIRST ROUND and has performed regularly over the past 6+ years. Michael’s style of guitar playing made it an easy decision to join REBEL SOULS. His classic rock roots, and diligence on dialing-in the right tone, enhances his amazing ability to capture the soulful blues rock riffs of Mick Ralphs and the raw sounds of Paul Kossoff.

David Blampied – Drums
David began playing drums at the age of 4, following the encouragement of his mother who decided even before he was born that he would be a drummer. As a very young drummer, David was exposed to a wide and eclectic range of influences from Lionel Hampton to Louie Bellson, Buddy Rich, and Joe Morello. Even going on to study with his influence and one of his drumming heroes Joe Morello. David has gone on to lend his percussion skills in several Led Zeppelin tributes as well the “Bridges to Quadrophenia” show while finding his niche as a versatile and dynamic rock drummer.

Dave Yarrington – Keyboards and Backing Vocals
Dave is an audiologist’s nightmare. In addition to playing with classic rock bands throughout the Hudson Valley, in his day job he teaches band and orchestra instruments to middle school kids. His autobiography will be titled “Noise and Hormones.” So do not be surprised if he does not hear you the first seventeen times you say something to him. Dave has been playing and singing harmonies, and the occasional lead vocal, with various local bands since 2005 or so.  He plays a Nord Stage EX76.

Andrew Strohman – Bass Guitar
Inspired by Geddy Lee, Chris Squire, John Paul Jones and Jack Bruce, Andrew picked up a bass guitar 35 years ago and has been playing ever since. Andrew has played in multiple New York-based cover and original projects including several years as the bassist for the Kristen Capolino Group. Andrew’s exploration of fretless bass tones led him to Boz Burrell and a deep appreciation for the unique, always moving bass lines which help give Bad Company’s songs an unmistakable groove. Andrew is super stoked to help recreate those grooves with REBEL SOULS.